On Monday I took Bagheera to Coal Mountain Animal Hospital with a bladder blockage. This happened back in March, when we took him to our family vet, Gwinnett Animal Hospital, and he stayed about a week for treatment, care, and recovery (yes, that's expensive).

This time around, he only needed to stay overnight, and I brought him home Tuesday evening (even though it was only overnight, it was also as expensive as the first time). He's got two different medications to take (be force-fed) for the next few days, medicine to be sprinkled on his food (which he tries to avoid), and special canned food (also quite pricey). But, the vet (Claire Surber) was quite impressed with his quick recovery, and feels that with follow-up and diet change, he'll be in good shape. (It was also noted that he's a hefty boy, and limiting his food intake wouldn't be a bad thing).


I've had to do some juggling to figure out where to put the now various types of cat food so each cat is only eating the food it should. Tigah, who is used to sharing Rachel Ray wet food with B every day, of course insists on getting her share of his new food, which she shouldn't be eating. B can't have any dry food at all, unless we start buying the (very expensive) special dry food. Biscuts only eats dry, so keeping her away from Baggie's food isn't much of an issue. Meghan is used to licking the plate after the cats are done, so she's kind of wandering around at mealtime wondering where the magic yummy plate has gone and when it will reappear.

I finally decided to put the dry dispenser and the regular wet food on top of the washing machine in the laundry room, because Mr. B is to heafty to jump up there, whereas the girls make the leap with no trouble. I put his medicated food at the regular feeding station, on top of the low file cabinet in my room, where I can keep an eye on it and engage the water bottle when Tigah gets too interested in it.

So far, the arrangement is working. Also, Bagheera can't go outside for ten days, so I'm playing Human Pet Door for five animals for a while. And people wonder what I do all day ;)

The patient is spending most of his time on my bed, switching between plots of sunshine, my afghan, and my legs. He's content, eating well (I'm sticking to 1/2 can twice a day for a while), and seems to be comfortable. He goes back to the vet on Friday for a check, then again in two weeks.

Posted by Five Bears A-Blogging at 6:04 AM No comments:

The Shackles of Programing

William had a Lieterature assignment to choose a poem and completely rewrite it, maintaining the basic theme and meaning. He chose "I Know Why the Caged Bird Sings."

The Shackles of Programming by William Huenergardt

A nail punched here, a drill bit there,
this product must be perfectly square.
Our programmed constructor works on the clock,
some hot glue here, another nail there.
A twist of the wrench,
making sure it’s snug and tight,
‘S12.YPHUS’ must have them just right.
This repeating productivity
that It’s mapped out to do,
is an endless cycle,
all day and all night.

With its body, it builds,
but with its mind, it thinks,
an oversight that they thought
were worked out of the kinks.
Its mainframe has thoughts of creativity,
but they’re muffled out by the sounds
of screeching and clinks.

With its camera, it can see
free construction behind the windows;
But it can’t be like them,
this is what it knows.
As hard as it wants,
To build what it wants,
It is constrained by the process
Of ones and zeros.

A staple clamp here,
Then it’s conveyed away;
The Shackles of Programming
Keep ‘S12.YPHUS’ at bay.
Then another one comes in
And it starts all over again;
The process must be exact
In each and every way.

It doesn't lose hope though,
That's what's important.
It knows that it’s flawed
In more than just one component.
Because, as the years ticked by,
‘S12.YPHUS’ had noticed
That its craftsmanship was becoming
More inconstant.

A nail bit here, a punched drill there-
Wait... That’s not right;
This product should be square...
Glue the wrench here...?
No, that’s not correct...
It was at this point that ‘S12.YPHUS’ realized
It was becoming more aware.

You see, at this moment,
‘S12.YPHUS’ had an epiphany.
It wasn’t messing up by accident,
It was doing it intentionally.
And so, as it continued,
Through the years to come,
It did it with a “smile”
Because it now had a prophecy.

With this new-found hope,
Of one day becoming free,
It therefore changed its alias
From It to He.
Even with the Shackles of Programming,
‘S12.YPHUS’ knows not to give in.
Because with every lock,
There's always a key.

Note: The character itself is based on Sisyphus.

Posted by Five Bears A-Blogging at 11:27 AM No comments:

There are some disadvantages to living in a smaller space than you are accustomed to, but there are also some advantages. I've pretty much settled everything into my small "room" at Moon Shade Hollow and worked out a daily routine that maximizes efficiency of space and effort.

Although I've got my small writing desk, I usually end up working on my bed. There's plenty of space to spread out, and it's comfortable for me and for any feline who cares to share.

Here, Tigah has worn herself out after scrunching, batting at, and otherwise messing with my paperwork, and claimed the lone bit of sunshine available on the bed. 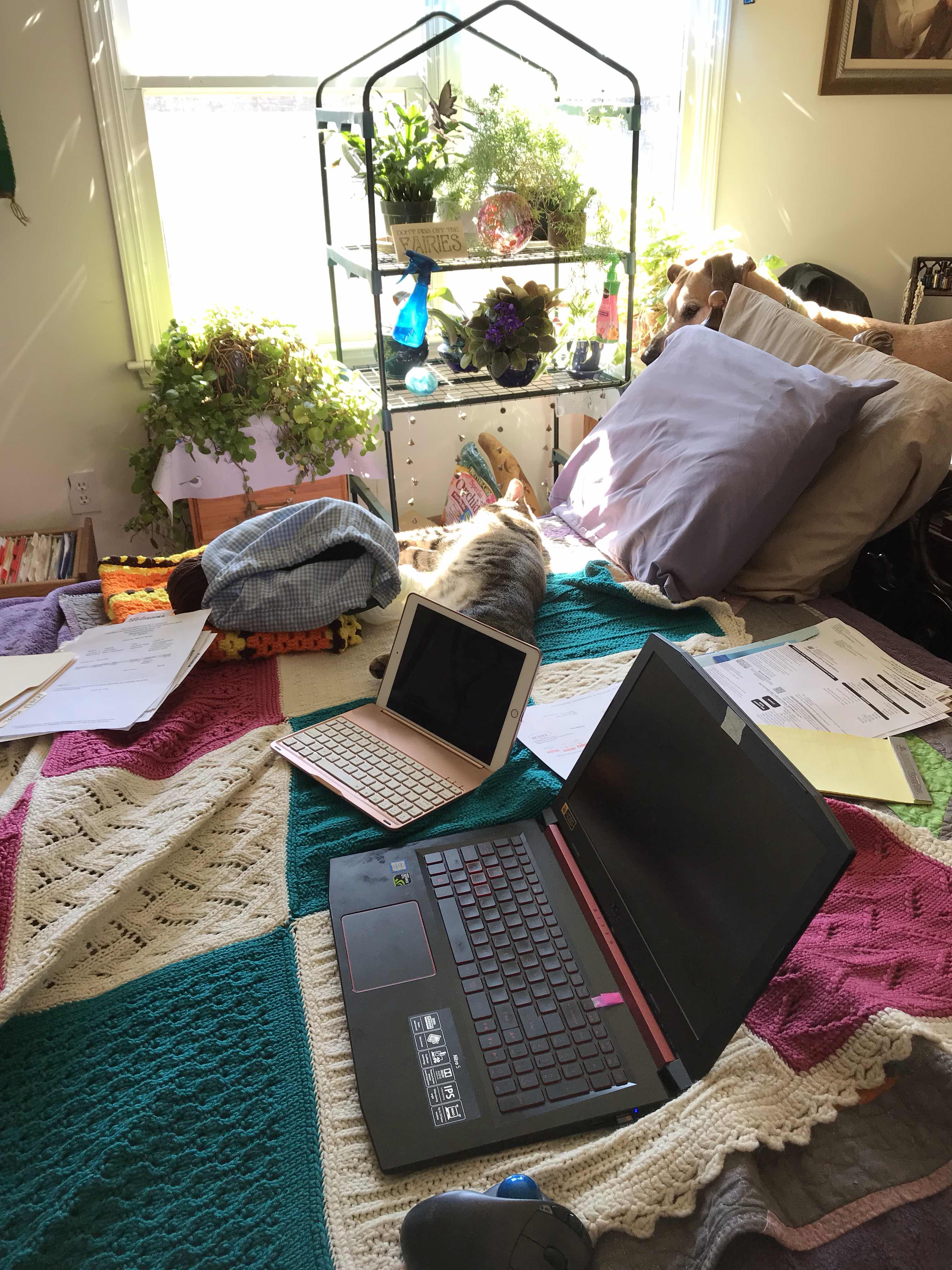 Posted by Five Bears A-Blogging at 10:32 AM No comments:

William and Thomas are both deeply involved in Dungeons and Dragons, participating in online games at least once a week with various groups. Part of the D&D engagement is creating your own characters with their own personalities and powers, including crating their background story.

This is William's most recent character creation, told in the form of a poem, complete with graphic representation.

There once was an Elf
Who could play on the fiddle
And had an extravagant passion
To make people giggle...

His one hobby in life
Was to entertain
But alas
He was not accepted
For he was a HALF Elf
What a shame...

As hard as he tried
To please the crowd
He was always frowned upon
By a disapproving shrowd...

And then one day
This Elf had enough
He packed up his things
And took off in a huff...

He went to a being
Of a higher power
And pleaded for a wish
To be funny on the hour, every hour...

His wish was granted
But with a price
His mind was destroyed
As part of a sacrifice...

Where could he be now?
It's tough to call
But one thing is for certain
The Half Elf got his wish after all...

Posted by Five Bears A-Blogging at 6:37 PM No comments: 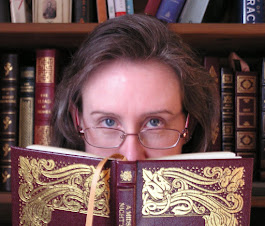